The parties in Como Dragon‘s Beasty Bar are legendary. Neither the big beasties nor the small ones want to miss them. But you can get in only if you leave enough guests waiting in line behind you. And the animals are already pushing and shoving and baring their teeth. Will the crocodile bite its way ahead? Or will the skunks‘ odor cocktails be too overwhelming? And the chameleons will probably make complete monkeys of themselves! Even the manes of the party lion regulars stand up when the next best seal opens up a new way in…

Choose a color by selecting one of the cocktails. Empty cocktails were already chosen by your opponents. 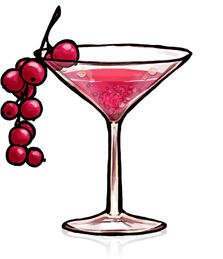 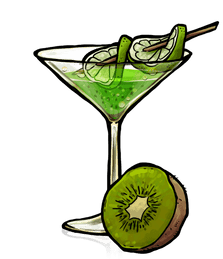 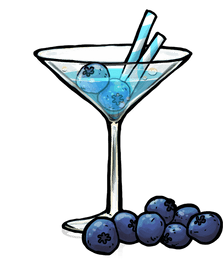 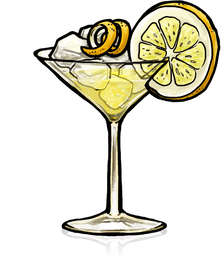 Your animals want to go to the party. To this end, they have to bear up against the pushing and biting rivals at “Heaven‘s Gate,” the portal to the Beasty Bar. Whenever the line has increased to five animals, the first two animals in line gain admission – and the last in line is excluded. The player who is able to get the most animals into the bar wins.

What's on the screen? 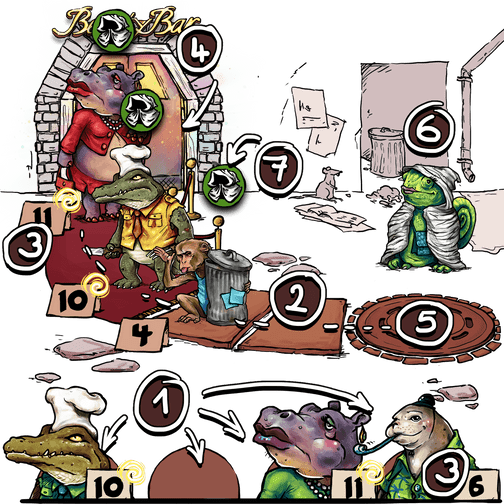 (1) Those are the animals on your hand. You always have 4 to choose from. Play one of them and a new one will be added while stocks last.

(2) This is the Jostling area. The queuing Animals are waiting here to enter the bar. There are exact 5 places.

(3) This is the strength of an animal - the higher the number, the stronger the animal.

(4) This is the entrance to the bar. The two animals closest to the entrance will enter the bar when the Jostling area is completely filled.

(6) Some animals need additional interaction after you played them. They sit next to the Jostling area and wait for your choice, like the chameleon in this example.

(7) Those buttons appear when further interaction is needed after playing an animal. In this case you have to decide which animal shall be imitated by the chameleon. Just tap on the button to choose one.

Course of the game

Playing proceeds in turns.
Each player owns every one of the 12 animals exactly once in the beginning. The first 4 animals are chosen randomly. As soon as you play one of them, one of the remaining comes up next. Each animal can be played exactly once by each player.

On your turn, the following four actions are performed in this order:
1 - Play an animal
2 - Execute the animal action
3 - Carry out “recurring” animal actions
4 - Five animals check (open the bar and enforce the exclusion)

Tap on an animal on your hand and it will tell you, what it will do. Tap it again to place it in the waiting line. If the Jostling area is currently empty, the animal played opens a (new) waiting line.

All played animals form a waiting line. Each newly played animal first has to get in line, that means, further away from the entrance than all the animals already laid out. The Jostling area can never contain more than 5 animals. 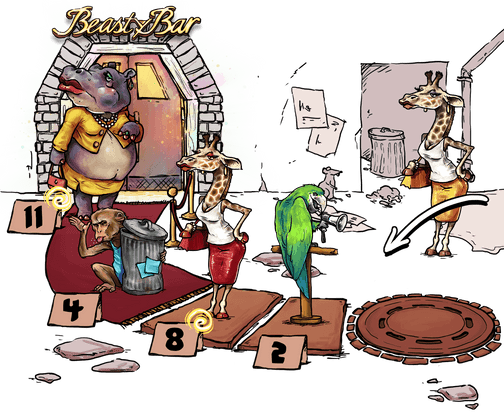 Example:
You place your giraffe into the Jostling area; it has to get at the end of the line.

Now the action of the animal you just played is executed, if possible. 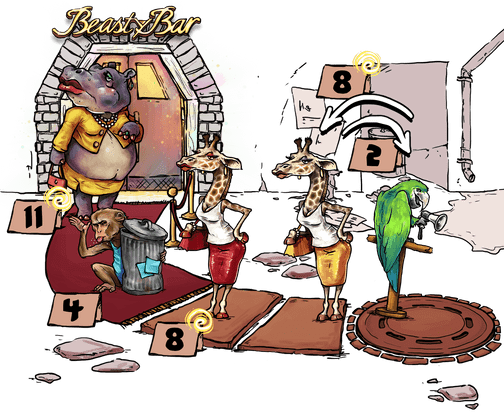 Example:
The giraffe you just played moves past the parrot, according to its animal action. 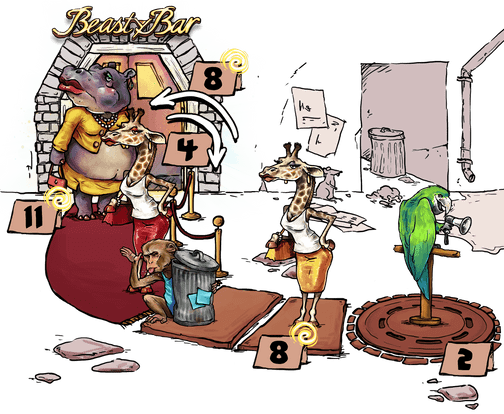 Example:
The “recurring” action of the hippo has no effect. The red giraffe jumps over the monkey. The yellow giraffe doesn‘t, since it has just been played on the current turn.

After carrying out all recurring animal actions, it is checked whether the waiting line consists of 5 animals. If there are less than 5 animals in line, nothing happens. Play immediately goes on with the next player.
If the waiting line consists of 5 animals, the bar opens; and the exclusion takes place as well:
The two animals that are closest to the entrance have managed to gain admission to the bar! They stay there until the end of the game.
The last animal in the waiting line is excluded: It falls into the drain and stays there until the end of the game. Bad luck – the party takes place without this animal!
The animals remaining in the Jostling area are (in unchanged order) shoved towards the entrance.

Please note:
Animals can also have to go "directly" from the Jostling area to the drain thanks to the actions of other animals. In this case, too, the remaining animals in the Jostling area are shoved towards the entrance.

Example:
After all “recurring” actions have been carried out, there are 5 animals present in the Jostling area. The entrance opens for the hippo and the red giraffe and allows them to enter the bar. The parrot is excluded since it is the last of the 5 animals waiting in line, and it lands in the drain. 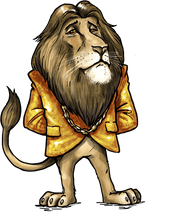 … considers itself the only true number 1 (Strength 12)

If the played lion doesn‘t encounter a member of the same species, it scares off all monkeys into the drain. Then it positions itself ahead of all the other animals.

If there is already a lion in the Jostling area, the newly played lion lands in the drain.

… thick-skinned, tramples everything aside that tries to get out of the way (Strength 11)

A hippo pushes toward the front of the line in the direction of the entrance. However, it is not able to pass a member of its own species, stronger animals (lions) or zebras.

The hippo carries out its action “recurringly” – on every subsequent turn of each player. 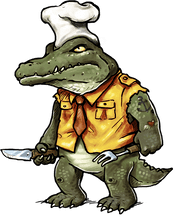 A crocodile eats all weaker animals that are placed in front of it. If it encounters a stronger animal or zebra while eating, the crocodile immediately stops. Eaten animals are discarded in the drain.

The crocodile carries out its action “recurringly” – on every subsequent turn of each player.

A snake has the effect that all animals in the Jostling area are immediately sorted by strength: The strongest animal is placed next to the entrance. The other animals are positioned behind it, according to their strength. Members of the same species don‘t change the order among them.

The giraffe carries out its action “recurringly” – on every subsequent turn of each player. Giraffes may jump over only one animal per turn. 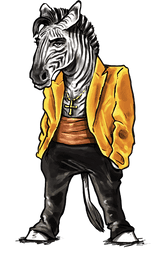 … considers its stripes as a great braking signal (Strength 7)

A played seal swaps the beginning and end of the waiting line.

Please keep in mind: If, through its action, the seal (not protected by a zebra) gets to lie in front of crocodiles and/or hippos, it is eaten/passed.

… masquerades as a different animal (Strength 5)

The chameleon carries out the action of a species that is present in the Jostling area. For this action (only), the chameleon also takes on the strength of the imitated species.
But as soon as the “recurring” animal actions are carried out (even on the same turn), the chameleon goes back to being a chameleon with a strength value of 5.

… is, together with his mates, obnoxious (Strength 4)

A single monkey in line has no effect.
If an additional monkey (beyond the first) gets into the Jostling area, this band of monkeys shoos all waiting hippos and crocodiles into the drain.
Then the just-played monkey pushes its way past all the other animals to the entrance, gathering its monkey mates that have been waiting in line directly behind it – now in reverse order. 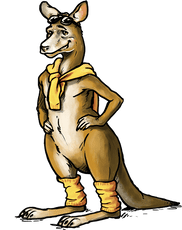 … is always a big leap ahead (Strength 3)

A kangaroo jumps over the last or (at the player‘s discretion) the last two animals in line. The strength of the jumped-over animals doesn‘t play a role in this.

A parrot shoos an animal of your choice out of the Jostling area into the drain.

… has a strong smell and finds this swell (Strength 1)

A skunk expels all animals of the two strongest currently displayed species – but never other skunks. The expelled animals are put in the drain.

Please keep in mind: If a chameleon is played as a skunk, it remains a skunk (with a strength of 1) until the two strongest species (if present) have been chased away.

The game ends as soon as all players have completely played out their animals or less than five animals are remaining in the game. The player who has the most guests (his own animals) in the Beasty Bar wins. If several players end up in a tie, these player's animals strengths are turned around and are summed up; then the player whose guests have the higher overall value wins. There can be more than one winner.

The player, who started the game begins the first game. Afterwards you start the games in turns.