Play
Board
Classic
Duel
To the game

Backgammon is one of the oldest known board games. Roll the dice and move your pieces accordingly. Try to reach your home and bear off your pieces first. A good strategy and a bit of luck will help you to win this game!

Choose your color, your opponent will get the remaining one.

When all your pieces are gathered in the lower right area - your home - you can start bearing off. Be faster than your opponent to win. 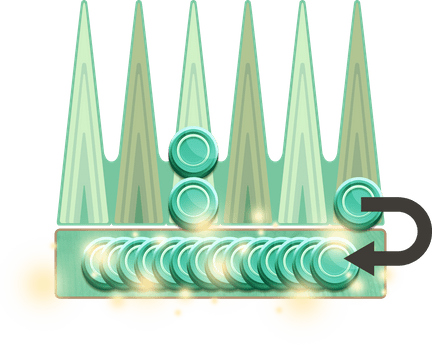 You play in turns - each turn consists of rolling the dice and moving your pieces. Roll and move your pieces according to the number shown on the dice. Each dice must be used separately but you can move the same piece twice.
If possible, you have to use both dice. If that is not possible, you have to use the higher number. If you cannot use any number, you pass this turn.

When you roll a double (the same number on both dice), you can move 4 times!

Your pieces must move from the upper right area, counterclockwise, to the lower right area. Gather them there to start bearing them off. Your opponent moves the other way round. 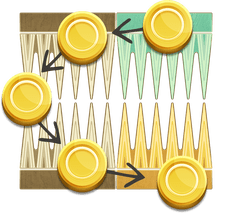 You can only move to fields, with no, or just one opponent, the amount of your pieces is irrelevant.
If you move onto a field with a single enemy piece, you beat it and it is sent to the bar. Pieces in the bar have to be moved onto the field first, before moving any other piece.

When all your pieces are in your home, you can start bearing them off. Depending on the thrown dice you can bear off one stone from the field that corresponds to a thrown dice (counted from the edge of the board). Alternatively, a stone can also move forward within the home area without being beared off. If there is no stone on the corresponding field and at the same time there are no more stones on higher fields, then it can be beared off from the next lower occupied field.
You cannot separate a dice between several pieces.

If you think, you will win the game, you can propose a doubling of scores. To do so, just activate the doubling cube. If your opponent rejects your offer, you win the game. With an acception, the game goes on. Now your opponent can offer another doubling - the score is multiplied by 4. This can go on up to a multiplier of 64! As soon as someone rejects a doubling, the game is over.

End of Game and Scores

Victory
When you are the first to bear off all your pieces, but your opponent has at least one piece also borne off, you win the game; worth 1 point.

Gammon
If your opponent has not borne off any pieces, this victory is called Gammon and counts as 2 points.

Backgammon
If your opponent has additionally at least one piece in your home area, it is called Backgammon and is worth 3 points.

You can get an additional multiplier - up to 64 - by using the doubling cube!

The loser of the game starts a revenge, because the starting player has a small advantage.