Multiplayer
To the game

YooLoo is a tactical party card game for 3 to 6 players.

After playing 10 rounds, the player with the highest score wins! To get points, you have to sort your cards, so they will win as many tricks as possible. 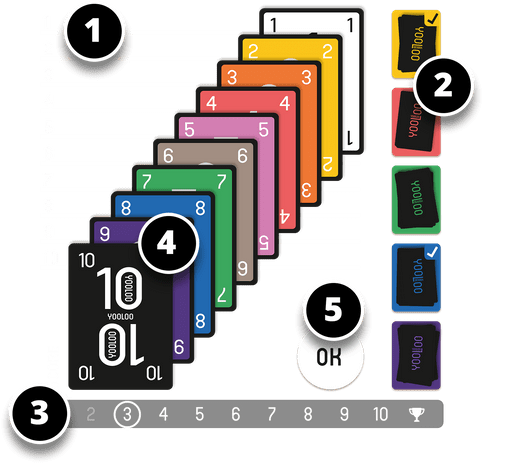 (1) The numbers tell you in which round your card will be played. Additionally they represent the score for this round.

(2) The status of your opponents is represented here. When they are still sorting, their cards are mixing, as soon as they are done, the cards stop and get a checkmark.

(3) The lower part shows an overview of games. Each complete game consists of 10 rounds.

(4) Your cards are displayed in the screen center.

You have 10 cards with the numbers 1 to 10. Choose the order of your cards, it cannot be changed later on!
The cards then will be played in tricks. Try to win as many tricks as possible by having the highest card to collect the score cards.
With drag and drop you can change the order of your cards. When you are done tapclick the ok button (5).

As soon as all players are done sorting, the score cards appear in the middle of the screen. Each trick wins the score card on top of the stack.
TappingClicking on your card stack reveals the top cards. Now the card values are compared - the highest card, which was not played more than once, wins! This player gets the top score card. The playing cards have the value of their numbers.
You can uncover the next cards by tappingclicking on your stack again. 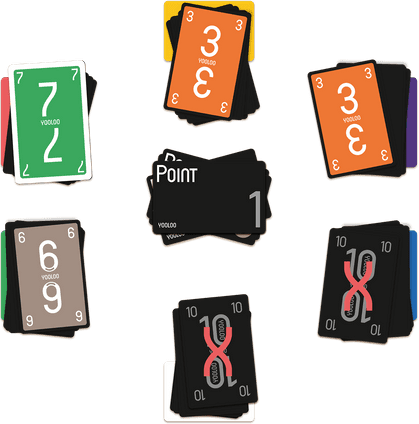 You (white) and the blue player both played a 10. Since it was played twice, both cards are removed.
The yellow and the purple player both played a three. But there are still higher cards in the game, so the threes are irrelevant.
The highest, unique number is 7, played by the red player.
So player Red wins this round.

If there is no unique number, the score card is put aside. The next round will win both score cards - the current and the next one.
10 rounds are played until your complete stack is empty.
If there is no winner in the 10th round, an additional special round is played.

There will be a “showdown” if no player wins the last round.
Choose one of the 10 cards by tappingclicking it and confirm your selection by pressing the ok button. This card will be used for the special round. The winner gets the 10 points score card. 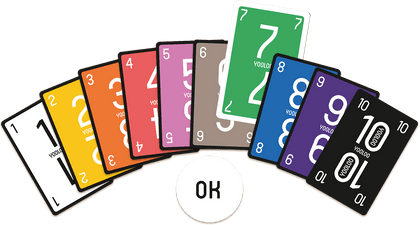 Score of the round

The results table shows all played cards and the scores for all rounds. The summed up score can be seen at the bottom of the screen.
The columns are assigned to the players by their colors.
TapClick on the rounds display to have a look at former rounds. So you might be able to identify the tactic of your opponents.
Afterwards you can sort your own cards for the next round.

After playing 10 rounds all scores are summed up. The player with the highest score wins the match.

All players can make their first move simultaneously. So the player who starts the revenge can always make a move.