Duel
Classic
Board
To the game

Checkers is a strategy game for two players. Plan your moves ahead to capture enemy pieces and upgrade your own to kings. Even though the rules are simple, the tactical depth is easily underestimated.

The challenger plays black. Since black is always the first to make a move, it is possible that your playing color changes for a revenge.

You have to capture all enemy pieces or prevent them from moving.

You play in turns. In every turn you can use exactly one piece for moving or capturing an opponent.

A piece can move diagonally forward. It can never move backwards or straight. 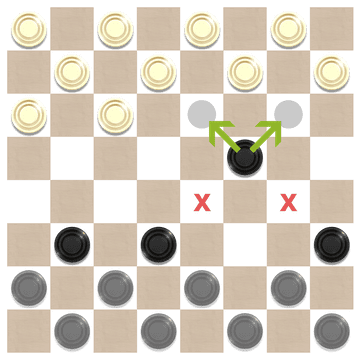 If possible, you have to capture opponents. Pieces you can move have a blue stroke. If there is no stroke around a certain piece, there sure is another piece that can capture an opponent.
Pieces can capture diagonally in front of them. They then jump over the opponent. So the square behind the opponent must be empty. The opponent is moved away from the square afterwards.
It is possible to capture several opponents in one turn with multiple jumps. 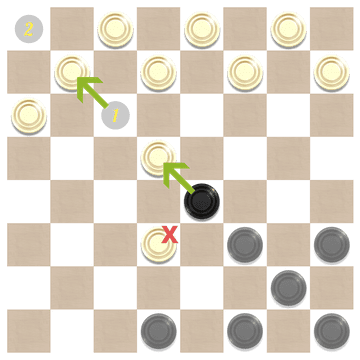 If a piece reaches the opposite side of the board, it is upgraded to a king. It gains two rings as a marker.
Kings can move differently from pieces. They can move forwards AND backwards and can pass as many empty fields as they like.
However, if a king captures an opponent, he has to stop right behind him. No matter how far he has moved to reach the opponent. Kings can be captured by pieces and kings the same way.
You an your opponent can own as many kings as you can get. 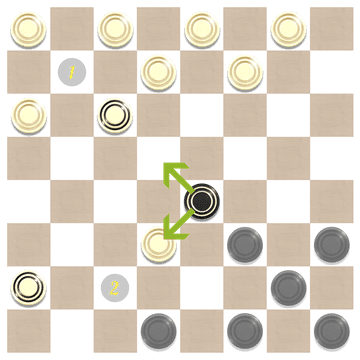 End of the Game

The game ends as soon as one player has no pieces left, the other player wins the match. A player also wins, when he blocks all enemy pieces, so they cannot move anymore.
There is even a chance for a draw. To get tie one of the following conditions has to be met:

The player that has won the game, is the new starting player and will make the first move.