Play
Multiplayer
Lucky
To the game

In this classical game, random numbers are drawn and the players mark them on their bingo cards.

Try to find and mark the drawn numbers on your bingo cards. The first player, who marks five numbers in a row, wins the game.

At first, choose a color. This has no impact on the chance to win or lose the game.

The chosen color gets transparent if it was chosen by another player in the meantime. In this case you have to chose another color.

You play in turns. Each turn consists of 5 drawn numbers. The first turn starts directly after you chose a color.

Try to mark the numbers on one of your bingo cards. You have 5 seconds for each. Till you are familiar with the game, you even get 2 extra seconds to locate a number. Every player has unique bingo cards with different, random numbers.

Hint: The drawn numbers and the numbers on the cards are distinguished by different colors. This makes it easier to compare them. 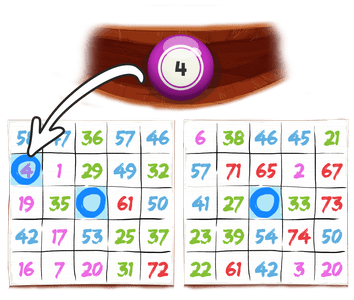 Keep in mind that a drawn number does not have to be on your cards - but it CAN be on both of them. In the latter case it can be important to mark the better number.

You can skip a number if you're sure it is not on your cards. Arrows are displayed after three seconds on the top right of the lane - just tapclick them.

After five drawn numbers you have to wait for your opponents. As soon as they finished their turns, your next 5 numbers will appear. 75 numbers are drawn at maximum. Usually, the game ends earlier because a player finds a bingo.

The drawing of the numbers does not start automatically if you leave the game card and come back. You have to tapclick anywhere to continue. This assures that you are ready to go on.

Keep in mind: that a drawn number is skipped, when you continue after you left the game card. This is the same as a timeout when trying to find a number.

Above your own bingo cards you see the cards of your opponents. Fields they marked are displayed, so you get an impression of their game status. Keep in mind that each player has different bingo cards with random numbers.

The player, who found one or more bingos with the fewest drawn numbers, wins the game. A bingo consists of 5 numbers in a row on a bingo card. It can be horizontal, vertical or diagonal.

In case several players needed the same number of turns to find a bingo the time is taken into account. The player, who marked the last number faster, wins. The time is rounded to seconds in this case. Otherwise there are several winners.

At the end of the game each player can start a revenge. The chosen colors remain. The game starts directly with drawing the first numbers.