Bubble Factory is a strategic game, that requires dexterity. Try to free big ball chunks at once to get the highest score.

Zen:
Take your time and plan your moves. The playing field only moves when you shoot a ball.

The highest score wins! You get points for every ball you destroy. Larger groups of balls generate more points!

Each game consists of three rounds. Every player has the same playing field. Try to free big ball chunks at once. As soon as you shoot at the stars, you end the round.

The bubble factory has many different kind of balls.

Colored balls can be destroyed when you make a chain of at least 3 balls. All balls of the chain will fall down and give you points.

Gears cannot be destroyed. But they will fall down if you destroy all balls that hold them. You cannot stick balls to them. Shooting a ball at a gear will result in the ball falling down. 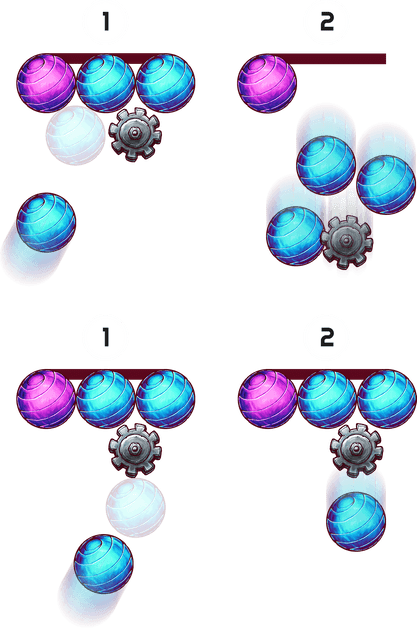 Robots are trapped in glass balls. Free them and they will reward you! Destroy all balls that hold their glasses to free them. They then will give you a charge for your special, which is displayed in the bottom left corner. TapClick it to use it.

Star balls are the level solver. Shoot one of them to finish the current round. All remaining balls will fall down and will be added to your score.

Rainbow balls are a special, charged by robots. They are the same as colored balls. But they count as any color that will create a combination with your current shot.

Black holes are a special, charged by robots. They suck in everything around them. They can be the solution to some tricky parts of a level.

Sliders are a special, charged by robots. They move the whole playing field upwards - up to the point where you hit it with them.

Some balls are very rusted and do not work properly. To be able to destroy them, you have to remove the rust first. Include them in chains and one layer of rust will be removed.

Rust can be a very hard part of a level. But the crazy thing is, you can influence how much rust your opponents will get in the next round. Shoot a chain with every shot and create a long streak. For every shot of a streak one layer of rust will be added to every opponent. If you miss or do not destroy balls, you have to start again - the so far gathered rust remains.
You can see in the result screen:

To shoot a ball hold down your fingerclick the mouse on the playing field. A laser will appear (1). It indicates where the ball will hit. Drag your fingermouse to move the laser. Move it down to the very bottom to cancel the shot. 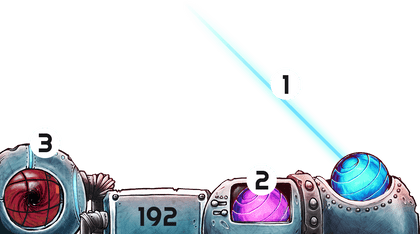 Left of your current ball (2) is shown the next ball. TapClick it to swap it with the current ball.

At the very left (3) is the display of specials. If you gained one, it will be shown here. TapClick it to use it.

The game ends after three rounds. All points are added up and the player with the highest score wins the game.

All players can play at the same time, so the fastest player can start the revenge.