Multiplayer
Strategy
To the game

Vortex is a strategy game. You have to block your opponents to gather your tiles around the target tower.

Choose a tile, respectively a color. Your opponents will choose another one. 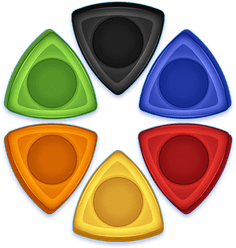 The object of the game it to gather all your tiles around the target tower first. 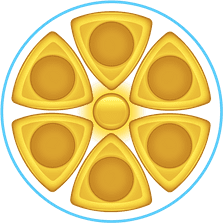 You play in turns.
At the beginning, the first player can perform one action, the next player can make two actions, the third player three. Then every move consists of up to four actions.
An action means to turn a tower clockwise or counter-clockwise. You can turn one tower four times or four towers one time.
You may only turn a tower of you are not in minority around it.
Made a wrong move? No problem, just tap on the arrow buttons (

) in the lower screen to undo your actions.
When you finished your turn, just tap the ok button (

In each game you can perform two special actions. A special action means to be able to turn a tower, even if you are in minority. But you need at least one tile around it. You can only use 2 special actions in a game and they count as one of the four actions of a turn. An icon (

) displays, if you can still use your special turns.

The player who gathers all his tiles around the target tower first, wins the game.

The player, who lost the game, can make the first move in the next game.