Play
Duel
Action
To the game

Happy Flappy is a game for two. Deep in the ocean some little sea dwellers are holding a swimming competition. Set up your team and collect more pearls than your opponent to win the rounds and the match.

Choose your team captain, your opponent will get the other one. 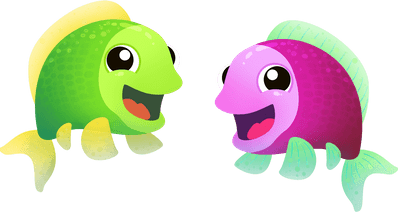 Win more rounds than your opponent to win the whole competition. In the end it is not important how many pearls you have collected, but how many rounds you won.

There are three rounds for the competition in total. The first is started by the challenger, every other one by the loser of the former round.

Choose at first your fish and afterwards the level you want to play, out of two randomly chosen ones. The former winner can now also choose their fish, but they have to play the same level.
If both gather the same amount of pearls, the player, who lost the former round, can choose the next level again.

A round ends at the flag, or if you crash into an obstacle. All pearls you collected so far are counted.

To give untrained swimmers a good chance, you can restart a level if you crash into an obstacle without having collected any pearls. Also have an eye on the net at the top and bottom of your screen. You may not touch it - fishes do not like nets!

The team captain
Has no special abilities, but to watch out and motivate the team! A good choice for all the levels and can be used more than once. Go team!

Selina, the seahorse
She likes all things shiny and has a special gift for collecting. The pearls just come to her, she doesn't even have to touch them.

Jelena, the jellyfish
Jelena likes to take on things slowly but surely. She swims slower than the other competitors and therefore can maneuver easier than the others. In a race where speed is not a factor, this is a very valuable feature!

Angus, the angler
He brings his own flashlight! In dark levels, where others easily overlook an obstacle, he sees everything as in broad daylight.

Turanda, the turtle
Whenever she touches an obstacle with her hard and sturdy shell, she does not even flinch, because it protects her.

Paul, the puffer
Some think he is full of himself, but actually this is just his air defense! He puffs up and whenever he bumps into an obstacle he looses some air and some progress, but after one tapclick, he just carrys on swimming! But be carefull, when he is out of air the obstacles will stop him, just like everyone else.

The amount of victories is counted for both teams. The team with more victories wins, regardless of the total amount of collected pearls.

The loser of the last match may start the new one.