Duel
Classic
Board
Strategy
To the game

GO is a classical tile-based game from the Far East. Occupy the majority of the board to win the game. It is easy to learn but hard to master. Although it has just a few rules, it has a very high ratio of strategy and planning. For more pace we use a 9x9 board, instead of the usual 19x19 fields.

Whoever starts, gets the black stones and places the first stone on any line crossing.

By placing stones in turns you try to conquer territories and capture opponent stones.
The player with the larger territory and more captives wins the game. The amount of both is summed up at the end.

You can only place stones on empty fields (where two lines meet). To confirm a placement you have to tapclick the stone a second time.
Some fields are prohibited. They are marked with an

. There are two possible reasons: you would either harm yourself or cause a repetitive game situation. That will be explained later.

Every occupied field is worth 1 point. Occupied means any group of empty fields that is surrounded completely by your stones.
So try to avoid placing stones in your territory, or it gets smaller! 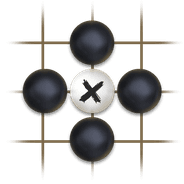 Example: 4 black stones surround a white one. The white stone will be removed from the board.

Captured opponent stones are removed from the board and give you each 1 point. They are removed automatically.
If the stones are not removed, there sure is an empty field left within the surrounded territory.

To place a stone on the last empty field of enemy territory would result in suicide. Therefore it is forbidden.
But if your stone captures enemies, they will be removed first. You may place the stone when it is not captured after removing the opponent captives.

It is also not allowed to place a stone that causes a situation that already occurred in the latest move. 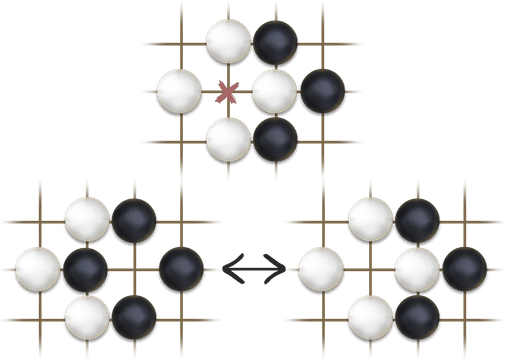 Example: You may not place a black stone between the white stones. It would capture and remove the right white stone, but white could place a new stone there afterwards. So this would create a situation that can be repeated endlessly.

Every stone placed in your territory will make it smaller, therefore it is allowed to pass as often as you want to. Just place a stone in the pass area above the playing field to do so. But there is a catch! Every time you pass, your opponent will get 1 point. If both players pass their turns, the game ends.

The game ends when both player do not want to or cannot place a stone anymore. Then the territory is measured, the captives are counted and the amount of opponent passes are summed up for every player.
The sum of those three numbers is the final score. The player with the higher final score wins the game.

The starting player has a slight advantage. Therefore the loser can start the revenge.