Multiplayer
Classic
Board
Strategy
To the game

Chinese Checkers is a classic board game. Due to the star shape it can be played with up to 6 players. The game requires planning, tactic but also a bit of luck, that your opponents do the "right" moves.

Choose a color, your opponents will choose another.

The player wins, who gathers first all his stones in the finish triangle.

You play in turns. In each turn you can only move one stone, but make as man jumps as you want. You cannot defeat any stones. But opponent stones as well as your own stones can be used to jump over them. You can cross the whole playing field when you find a good jumping chain. 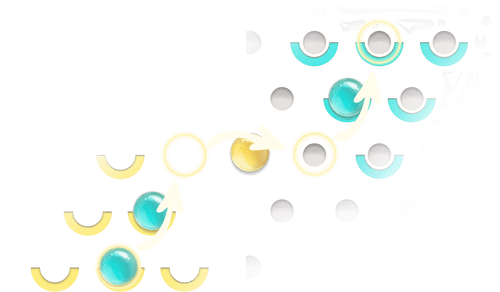 To confirm a jumping move tapclick again on the moved stone. Moving to an adjacent field does not require a confirmation.

As soon as a player has all his stones gathered in his finish triangle, he wins the game and the match ends.

To encourage fair play, a player has already won if one or more of his stones cannot enter the finish triangle because an opponent occupied some of the fields, and the blocked stones are directly in front of the blocked fields.

You start in turns, so all players start the game equally often.