Multiplayer
Action
Wordgames
To the game

Sixteen letters - but how many words can you create with them? Find within time as many words as possible. Every found word will change a letter and create new possibilities. The longer your words are, the more points you will get. Can you find more than your opponents?

You can choose one of 2 modes.

Start allone is an asynchronous mode. Everyone can make their turn whenever they want. No need to wait for the other players.

Play live is the simultaneous mode. All players have to be online and activate this mode to play it. Every found word directly influences the playing field of all other players, that makes the game even more intense!

Gather the most points within time to win the game. You get points for valid words, depending on their length. A few long words are better than many short words.

Depending on the mode you chose, you play all together at the same time, or one after the other. The gameplay is very similar, though.

Every player has the same playing field with 16 letter dice. Your task is to find words within the field. You can use every letter exactly once. The next letter has to be a direct neighbor of the current one - horizontally, diagonally or vertically. 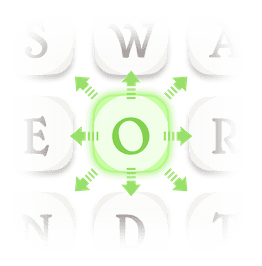 To submit a word, move along the letters and let go when your word is complete. If you touched a letter by mistake you can go back to deselect it. 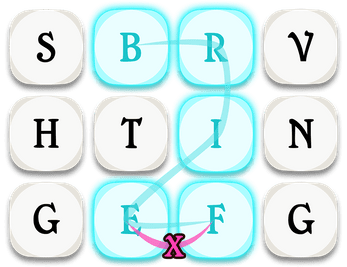 Example: You can form BRUSH, but BRUSHS does not work, because you already used this S. 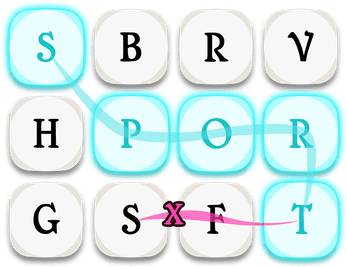 Example: You can form SPORT, but SPORTS does not work, because the second S is not a direct neighbor of the T.

After submitting a word, it is checked by the game. If it is invalid, it will turn red and disappear. Keep on searching for a new one! If the word is valid, it will turn green and will be added to your list of found words on the right.
Additionally one of the letters will change! So you will never run out of possibilities to form new words.

When you find a longer word with the same root word, your already found word will be replaced. So always look for the longest possible word. It does not matter what words the other players found, only your own words influence your score.

When you play in simultaneous mode a letter will change whenever a player finds a word. That shifts the focus towards speed. So sometimes it is better to submit your word faster, instead of looking for longer variants, or an opponent will submit a word and a crucial letter of your word may change! Longer words still grant more points, so try to find a good balance between word length and speed - depending on your opponents!

You get points for every word depending on length. Try to make the longest word possible! When you have several words with the same root word, only the longest counts!

All player have the same amount of time to find words. After everyone played, the score is compared. The player with the highest score wins the game.

A revenge starts with the choice of mode again. If someone chooses to start alone, they can play without waiting for the other players. To play the simultaneous mode, everybody has to confirm it again.