Fortune Roller is a word game with a bit of luck. As in the widely known game hangman, you have to guess certain terms, letter by letter. Do you have a lucky hand for spinning the wheel to get the highest scores?

Give the wheel a good strong spin to the right to get your playing color.

Guess the term first!
Each round you can choose another letter, if it is part of the term it will be marked. Every letter counts and is worth the amount of points, that you rolled on the wheel. If you guess the searched term correctly, you will get bonus points on top! The game consists of serveral rounds. But the score at the end only decides about the winner.

Each game consists of 4 searched terms, that are solved one after the other. You have three possible actions to takein your turn:
1) spin the wheel and guess a consonant
2) buy a vowel with your points
3) solve the searched term 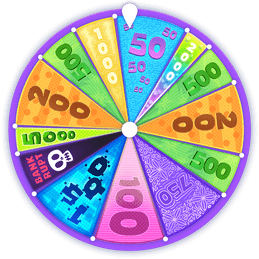 But beware! There are evil fields on the wheel and one unlucky spin can have drastic consequences! It can be harmless things like spinning again. Or not so nice, like losing a turn. But it can also be really bad, like losing all your points! So good luck! On the other hand, those things can happen to your opponents as well... and it might be possible to still win a game you were already losing. The amount of negative fields will increase from term to term, but so do the scores on the wheel!


Hint: If you want to solve the term or buy vowels, you have to do it within your turn - before you spin the wheel a third time! As soon as you spin it a third time your turn is over.

During your turn you can buy vowels as often as you want. Each vowel has a fixed price, which does not vary with the amount of actual occurances. That means no matter whether the vowel is not part of the term at all, or appears 5 times, it will always cost the same.

During your turn - before your third spin - you can try to solve the term.
All missing letters in the term will be marked one after the other and you select the right letter from the field below. You can cancel your try as long as not all letters are selected with the button in the lower right corner. If you selected a wrong letter - just delete it again by tappingclicking on it above.
As soon as you entered all letters, the button changes and you can send in your guess to see if you guessed correctly.

If your guess is correct, you will get a huge score bonus! You also get the bonus if you selected the last missing letter after a successful spin.

If your guess is wrong, your turn ends immediately. But the game goes on until the term was guessed correctly. You can try again in your next turn.

After every round the current results are shown. You can easily see, who is leading the field. The scores of each round will be carried to the next. The game ends when the last term is guessed. The winner ist the player with the highest score at the end of the game.

The player with the lowest score will start the next match.