Kabooom! is a game of strategy for 2 - 4 players. Plan your towers and win!

Choose one of the 4 colors.
The starting player can also set the level of difficulty.

Easy
Every tower, even single counters, score. The counter setup is done randomly by the game itself. This mode is great for your first game.
This mode is faster than placing all counters, but less tactical. So think twice which mode you want to play.

Medium
Towers are worth one point less than their height. You place the counters one by one. This mode is good for advanced players.

Hard
Towers are worth two points less than their height. You place the counters one by one. This mode is perfect for pro gamers.

Try to get the highest towers to win!

With difficulty set to "easy", the counters are placed randomly.
Depending on the amount of players, 6 to 12 counters are positioned on the board. The symbols are chosen randomly as well.
This removes a lot of strategy but makes for a quick, random game. It can be used to quickly teach new players how counters move when learning the game.

One by One Placing

You can place your counters as you wish, when the difficulty is set to "medium" or "hard".
In turns, players place a counter of their color using drag and drop. This is repeated until the board is completely filled. Try to place your counters tactically and start to plan your towers!
Note: With more than 2 players not all your counters can be used!

When placing counters, look at what has already been placed. Is your counter best placed to attack an opponent, or defend / counter-attack?

Sometimes it can be worth moving onto one of your own counters.

Corner squares have only 3 borders. This makes them easy to isolate with empty space.

Moving onto an opponent's counter or tower means they have one less option on their go.

Central squares are good to place dynamite: many targets.

As soon as all counters are placed the second phase of the game begins: the capturing.

You build towers by capturing counters.
A tower is owned by the player, whose counter is on top.
A tower moves in the same way as the counter on top.
Towers are shown with a maximum of three counters, so counters behind them are not hidden. In the lower right corner of each tower is a display, that tells the exact amount of counters this tower consists of.

You can move a counter or tower to any adjacent square - including diagonally - if:

the square moved to is not empty

the counter or tower would not lose to the destination counter

Hint: the destination counter my be of any color, including your own.

If you do not wish to make a move, you may pass, tapping the x button.

Keep in mind: when all players pass, the game ends! If you are the last player to pass, a message will be shown to you in the lower screen, after tapping the pass button.

Symbols behave like in a game of Rock, Paper, Scissors. Additionally they can capture themselves and dynamite beats everything - Kabooom! 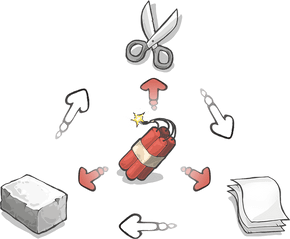 Example: paper beats paper and rock, but is captured by scissors and dynamite.

When all players consecutively pass, or no player is able to move, the score is counted. Depending on the difficulty the towers are worth different points.

Dynamite is never worth points!

The game ends when either:
all players consecutively pass, or no player is able to move.
The player with the highest score is the winner!

The player, who created the first game, can start all following games as well.